My training isn’t there quite yet, but it’s the time of year when racing starts sounding fun. Two weeks ago I hoofed down to Bend with Peter to kick off the competitive “season” at the Horse Butte 10 miler. The Nike and Brooks elite teams took care of business up front, but I was happy to grab 7th in 1:00:06, just short of my sub-1 hr target. It was a blast, particularly in the welcome sunshine of central Oregon, and on return to Seattle I finally stopped procrastinating and signed up for Yakima Skyline Rim 50K. I couldn’t quite figure out whether it was a race in my wheelhouse — whatever the equivalent of metacognition is for running ability, I don’t have it — but local enthusiasm for the event was contagious, and there were some fast runners signed up, so I took the financial plunge.

And then, a curveball: Peter asked if I would be interested in climbing and skiing Mt. Adams on Sunday. It was a dumb idea to do both. But I couldn’t say no. I recruited Richard, knowing he’d be equally taken with it.

The race was a pretty rough time. After living large in an E-burg motel the night before, the day broke strikingly clear and worryingly warm. Things went well at first. I spent the first 8 miles running near Mike Foote, who seemed to be playing it smart twenty seconds behind the lead pack. On the second major climb, however, he took off, and I found myself pushing hard with Casey Weinman, a grad student from Missoula who happened to be roommates with old PDX friend Nick. We stuck together through the turnaround at 2:28 or so, now four minutes behind Mike.

It was starting to get hot. Our pace up the third climb was noticeably less peppy than it had been on the way out. Part way to the crest, Max Ferguson caught up with us, solving the mystery of where the old course record holder had been hanging out in the pack. After topping out and hitting the rollers along the ridge, Max and I broke off ahead together briefly before I stopped to hit a gel and was gapped. From there things got ugly. Down to the final aid station my legs were cramping sporadically, and I was finding it hard to run at all. I rolled in, somewhat incoherent, and stayed for several minutes trying to get it together as runners came and went. I considered dropping, but then convinced myself it would be unsporting, and began marching up the hill, just as Casey arrived. Looking haggard, he shared only a single word in passing: “Gnarly.”

For the rest of the race, hiking was interspersed with bouts of lying in the sage, helpless to prevent my legs from spasming grotesquely (Max later described this phenomenon, wherein your muscles visibly pulse and undulate of their own accord, as “the guppies.”) I ended up crossing the line in 6:12 and 18th place, having run a 1:45 positive split. C’est la vie. Next time, I hope Washington can have a better showing against the marauding Montana Trail Crew.

Immediately after finishing, I was pretty sure rallying for Adams was out of the picture. But a few hours later, my electrolyte balance was restored to something approaching normal, and Richard’s enthusiasm was predictably high, despite having had a rough day himself. We hopped in the van and headed south, driving some of the prettiest highway in Washington State, and broke out onto high bluffs above the eastern edge of the Columbia River Gorge just at sunset. The world can be an absurdly beautiful place.

Peter was lying in a field outside of Trout Lake when we showed up at dusk. From there, we were able to drive all the way to the crowded Cold Springs Campground at 5500′. I slept out for the first time this year, under piercing starlight and widowmakers from 2012’s burn.

The climb was mostly a slog, although I’m never going to get over volcanoes. I was working pretty hard all five hours it took us to summit, the top 2000′ feeling especially bad. Though the Southwest Chute, our original goal, is certainly the prouder line, I didn’t trust my legs to handle chickenheads high in the couloir, and so we stuck to Suksdorf Ridge on the descent as well. Conditions were icy above 10K, corn between 10K and 6K, slush below that. It was generally excellent skiing. 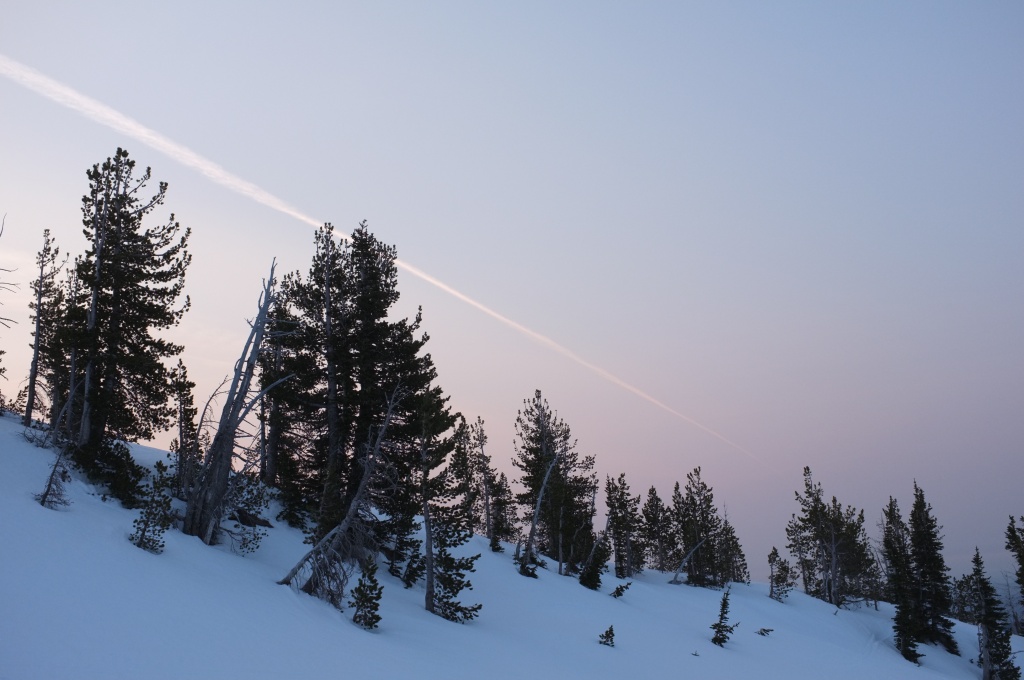 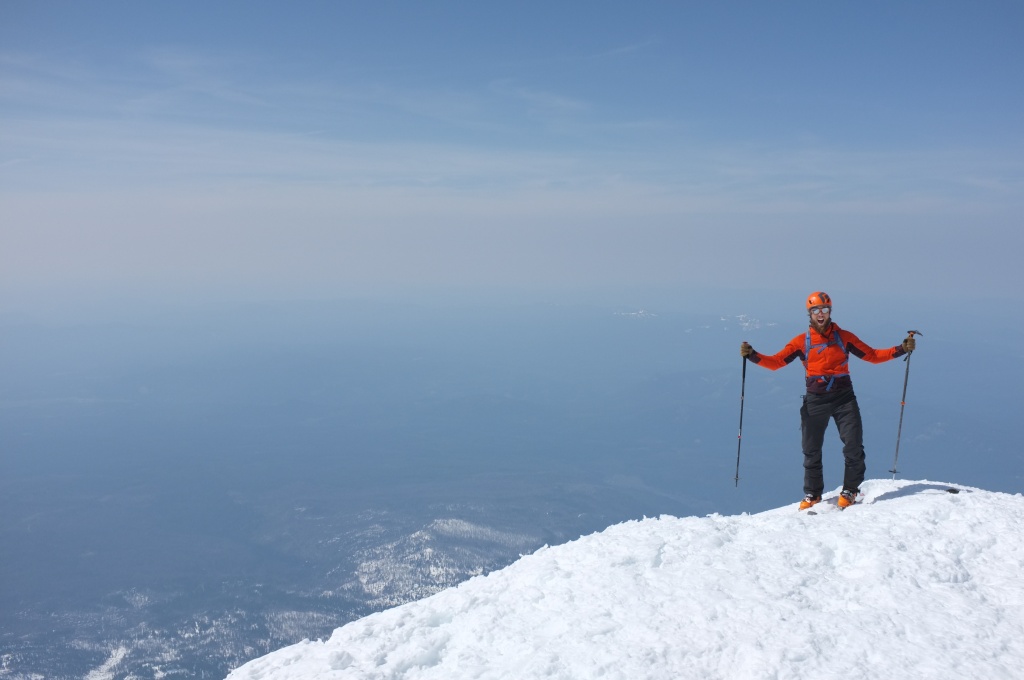 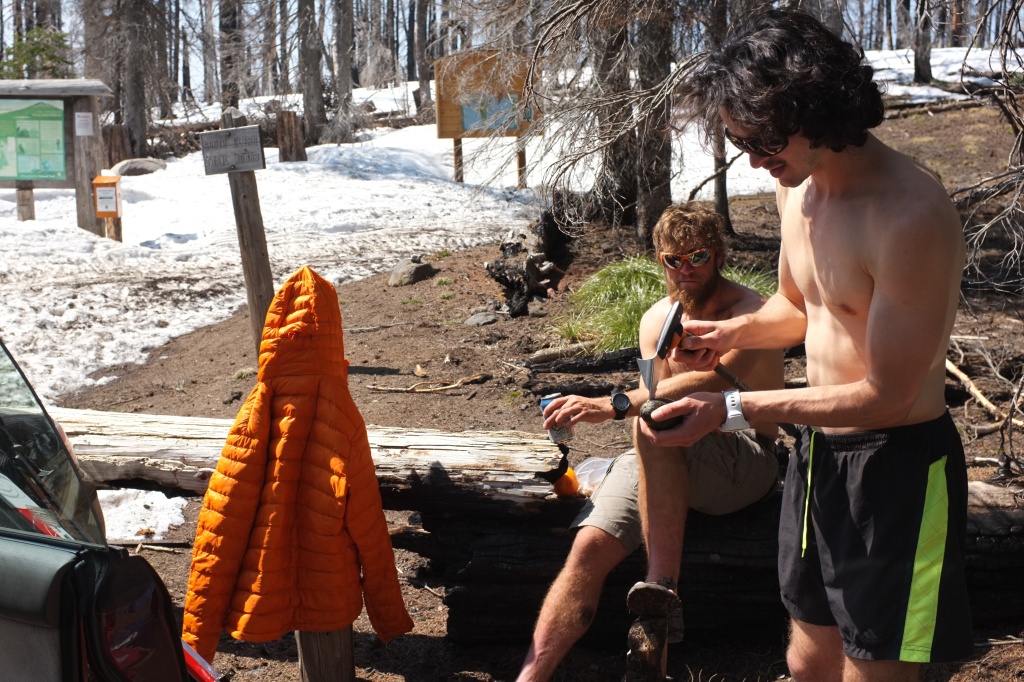